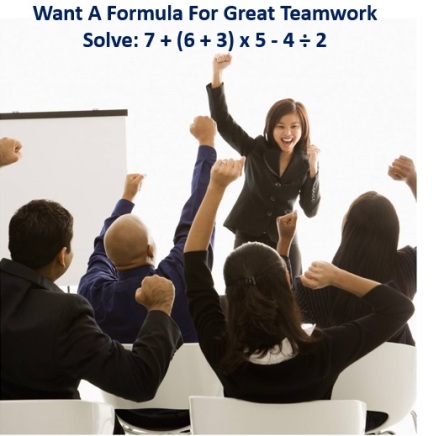 A lack of cooperation is one of the challenges that frustrates effective teamwork. The absence of a sense of “belonging” goes to the heart of the issue.

As in Algebra, groups apply brackets when conducting their affairs.

Let’s now take the leap from the abstract to the real live challenge of working cohesively with others.

One common problem in dysfunctional teams is the failure of members to identify with the team. They don’t see themselves as being part of the whole that is bonded by common objectives and shared goals.

The brackets say – there is a bond that ties us together. The on the ground reality is that many speak of their teams in terms of they instead of we.

Another tell-tale sign that the brackets are meaningless in terms of inclusion, is the fact that team successes are not celebrated as personal successes. It is like a disgruntled defender coming home to report that they won the match. From the bench he does not see himself as belonging in the team.

Do a bit of investigative work over the next days and listen carefully to the dialogue of colleagues – your team and other groups. See how often you can detect pride in the accomplishments of the group to which the individual belongs.

In cohesive and functional teams the pride comes from just being a part of the team. Members champion the cause of the team as a whole and each member individually. Team member Jenny’s graduation is ours. In a real sense it might be because we helped so much with her research projects and proof reading her submissions!

That is the spirit that fuels high performing teams and tightly connected groups.

Meanwhile, back in dysfunctional land, Desmond has been like a zombie since he was passed over for the Team Leader role. He might not openly tear down what Martha puts forward but his lack of interest cannot be missed. It is also noticeable that people who were close to Desmond and who felt that he should have got the promotion are also not engaged.  The separation is not only mental as they have now started to eat as a clique in a corner of the lunch room.

This team is on a downward spiral and the impact will soon be evident in their key performance indicators (KPIs).

Unfortunately, it is Martha’s responsibility as Team Leader to solve the problem. She may not have appointed herself but now it is her job to get the best from her team.

She needs to have a heart-to-heart talk with Desmond. She can share that she has observed that he is not the dynamic, vibrant person of three months ago and she would like to discuss the change. She needs to steer clear of even a hint of accusation with respect to his lack of support.

One strategy that might work well for Martha is for her to find some solution – a role, maybe – that helps Desmond to save face and feel better about himself. Could she identify a discrete part of her responsibility and invite him to take charge of it without weakening her authority?

That could produce the benefits of getting Desmond engaged once more while giving her the opportunity to focus on other areas. Of course, if Desmond messes up that would provide grounds for another conversation.

Join me in the Training Magazine and Sales & Marketing Magazine sponsors a live webinar: “Is Your Coaching Truly Effective? Let’s Change That”.  Thu, Jul 06, 2017 at 11AM Pacific / 2PM Eastern http://www.smmconnect.com/events/1157?gref=SMMCtwitter